This is the fifth week of the CDC Flu Challenge.  Region 4 remained above its onset value (for three consecutive weeks) and Region 1 and the national have crossed their onset values in the past week. The %ILI values for Region 6 were adjusted downward, to just below the onset value of the region.  Currently, six regions (1, 2, 4, 5, 6 and 7) and the national are (mostly well) above their historic average %ILI values, and four regions (3, 8, 9 and 10) are tracking their average %ILI values closely.  As in the previous week our selected forecast for the national peak week (second from right panel in top row) comes from coupled spatial model with a force of infection that depends on the school vacation schedule and consequently shows a probability for either an early (EW 52) or later (EW 6-7) season peak. Our forecast for onset (second from left panel in top row) is based mostly on the observed data (EW 47) but includes also a historic NULL model to account for the possibility of a data update that will reduce the national %ILI to below its onset value of 2.2%. Our national forecast for the next four weeks is shown in the top left panel with the corresponding probabilities in the four panels of the bottom row. This forecast is based on a model of with a time-dependent (school vacation and specific humidity) force of infection.

Region 7 had a large increase in the previous week and has crossed its %ILI onset value (dashed grey horizontal line in top left panel below).  Our prediction for onset (second panel from left in top row) is therefore centered at the current epidemic week, but as in the national case we do allow for the possibility of ‘downward’ data update (and consequently a later onset week) by including the historic NULL model in our submitted forecast.   Similarly to the national case,  our prediction for this region season peak week is split between an early (EW 52) and a late (EWs 5-8) time.  Our forecast for the next four weeks (top left panel and bottom row) is based on school vacation and specific humidity time-dependent force of infection and a data augmentation procedure which uses %ILI data from previous seasons to inform the prior distribution used in the MCMC procedure. 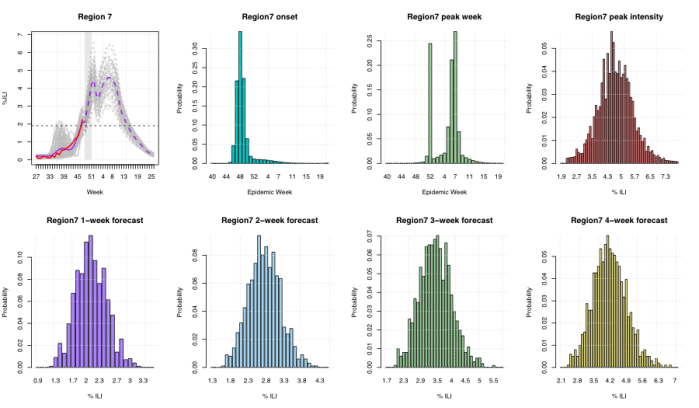